SEX in unusual places. Whether it’s in the back-row of a cinema, an airplane toilet cubicle or a hospital bathroom while your wife’s giving birth – it always adds a bit of spice to proceedings.

Clearly Andrew Donaldson and Karen Waters felt the same way after deciding to have a bit of rumpo-pumpo in a Surrey cemetery. Spooky eh? Well it would have been spooky if they’d done it at night. Instead they stripped off to get down and gravedirty in the middle of the afternoon.

Getting nekkid in public is a bit risky at the best of times, and Andrew and Karen’s case proved particularly unfortunate – as the cemetery backed onto a posho public grammar school and their sexy shenanigans were witnessed by hordes of school kids.

As pupils took pictures on their mobile phones, a police officer arrived at St Mary’s Church next door, and found the couple scantily dressed on one of the tombstones. Talk about grave consequences (see what we did there? Clever eh?) 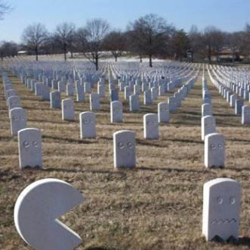 Cock-hungry Karen had put her jeans and bra back on by then and Andy had his boxer shorts on – but apparently his old fella was still peeping out in plain sight.

The pair were arrested and Karen refused to comment but wrote a statement saying she had her knickers and bra on at all times and did not have sex – despite mobile phone footage to the contrary.

Meanwhile, Andy was so drunk he could not be interviewed until the next day. And they say romance is dead.