When The Hunter Becomes the Hunted

Every year, over one hundred million sharks are caught and finned alive. Then they are thrown back in the water where they die miserably. Today most of the shark populations worldwide are threatened by extinction.

Especially in China, Hong Kong and Singapore shark-fin soup is regarded as a delicacy and status symbol. Shark protection is a vitally important cause if we wish to maintain a healthy balance in the world’s oceans. Thanks to shark diver Stefanie Brendl, the anti shark finning law, passed in Hawaii 2010, has already inspired similar legislation in other US States, as well as Malaysia, Hong Kong, Guam and several other Pacific Island Nations.

Posted in 1, Far East Asia, Food, They Said. Comments Off on When The Hunter Becomes the Hunted

Royal Rifles of Canada at the Repulse Bay Hotel – 1941

On 8 December 1941, a day after the its Air Force had devastated the U.S. Pacific Fleet at Pearl Harbour, the Japanese Empire launched an attack on the Britsh Crown Colony of Hong Kong.

In the ensuing battle, the Royal Rifles of Canada and the Winnipeg Grenadiers – the first Canadian ground units to see action in the Second World War—fought valiantly to defend the colony. Initially, the Grenadiers were dispatched to the Gin Drinkers’ Line, a chain of defenses in the New Territories on the Chinese Mainland, to hold back the onslaught. But heavy air raids and artillery attacks forced the Commonwealth troops to withdraw from the New Territories to their garrison on the island of Hong Kong. After several days of heavy bombardment, the Japanese stormed the island’s northern beaches on the night of 18 December.

The Japanese, well-supported from the air and reinforced from the Mainland, quickly separated the British East and West brigades, thus severing the Canadian contingent into two. With both brigades isolated, it was only a matter of time before the Island would fall. Still, the Canadian defenders fought on in the face of the relentless Japanese assault and suffered heavy casulaties. On Christmas Day, the Canadians were forced to surrender; those who survived would have to endure three and a half years of hardships as prisoners of war.

Terrestrial and nocturnal, Chinese Porcupines live in small family groups in ground caves or rock crevices. They have long quills on the neck, nape and back. When threatened by predators like lions, tigers and leopards, the quills bristle rapidly and the Porcupine beats the ground with its hind feet to scare enemies away. When threatened further, they will defend themselves by giving a sideways or backward attack in which the quills are rammed into the predators. One false belief that has arisen about the porcupine is there supposed ability to throw their quills. Untrue, as at no time could porcupines do this. In order for someone or something to become impaled by the quills, over 30,000 on average per porcupine, they would have to have actual physical contact with the porcupine.

The Chinese Porcupine can be found in Nepal, Eastern China, Hong Kong, Malaya, Sumatra, and Borneo.

If you spot street / urban art (graffiti, stencil, wheat-paste, etc.) anywhere in China, please share it with us at EDGE@Neocha.com. We’d like to document it on NeochaEDGE.

Posted in 1, A + E, Art, Far East Asia, The Red Binder, They Said. Comments Off on EDGE Creative Collective

Britain’s married men have formally applied for a so-called ‘super-injunction’, in an attempt to prevent the royal wedding of Prince William of Wales and Kate Middleton from being shown on television, ‘or indeed in any form of media whatsoever.’

Speaking outside the Royal Courts of Justice, spokesman Dennis Conningsby explained how he, together with every other married man in the country, is seeking to slap a last-minute non-disclosure order on the organisers of the big day, preventing them from broadcasting the ceremony. ‘For us, the very prospect of a whole day’s worth of royal celebration is simply terrifying. We’ve already had about a month’s worth of respectful toadying on our tellies, what with all those documentaries and wedding specials in that cloyingly measured tone of the BBC royal correspondent – it’s got to stop and it’s got to stop now.’

Experts believe that the royal wedding will be directly responsible for the temporary breakdown of over a million marriages this weekend, as Britain’s entire population of male spouses desert their homes and families in a desperate attempt to escape the bunting and cucumber sandwiches made by their wives in a frenzy of patriotic activity. ‘She’s even got a Union Jack vest for the bloody dog for Christ’s sake,’ complained Conningsby. ‘Don’t get me wrong – I’m as happy for Wills ‘n’ Kate as the next man – but come on: forking out fifty quid for a knitted toilet cover in the shape of the happy couple is taking the piss!’

It is predicted that it will be standing room only along Britain’s rivers and lakesides, as vast numbers of men suddenly develop an interest in fishing, while there have already been reported scuffles outside golf courses, model railway shops and DIY stores, where queues of married men are already forming. ‘I thought I’d just ride the next few days out in my allotment,’ revealed one such refugee, ‘but when I got there I discovered at least a dozen other blokes on my patch, pottering around in a vain attempt to look busy. Okay so the purple sprouting has never been so free of weeds, but where can I go? The shed’s already full to bursting. If I have to sit there listening to the missus and her mother cooing over the wedding dress – well, I’d rather cut my own head off with a trowel.’

‘Unless there’s some way of getting this bloody wedding off the TV, we’re all doomed,’ another married man concurred. ‘Imagine the scene: millions of men staring vacantly at all that pomp and circumstance – driven into brain-dead imbecility after watching the umpteenth fawning interview with the butcher of whatever horribly middle-class Home Counties village the bride comes from. Let me tell you – I’d be battering down the door of the nearest TV-less pub, where I’d slowly get pissed for the next eight hours if I didn’t have to officiate at the bleedin’ thing. Sod it; I think I’ll do that anyway.’

Depression could be caused by genetics. According to the EurekaAlert release, “The researchers examined the functional relevance of the genetic association between SLC6A15 and major depression. Already nondepressed subjects carrying the risk-conferring genetic variants showed lower expression of SLC6A15 in the hippocampus, a brain region implicated in major depression.” This is not the first time science has suggested genetics may play a role in depression.

Special One Disgusted with Life and The World 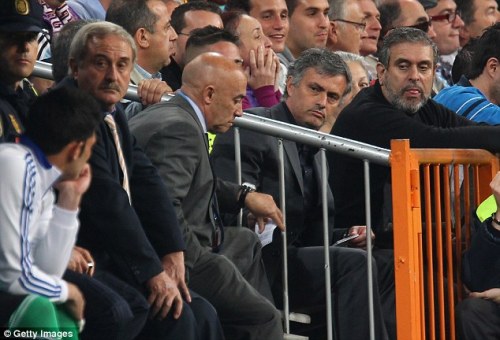 "One day he (Einstein) said that the only mechanical force more powerful than steam, electricity and atomic energy is will," Mourinho said.

Posted in 1, Beer, European, Football, They Said, WTF. Comments Off on Special One Disgusted with Life and The World
« Older posts
Punjapit