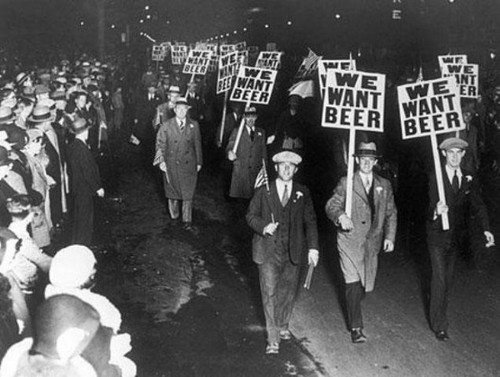 Though culminating on January 16, 1920, National Prohibition was not, by any means, a 20th-century invention. Efforts to curb, if not eliminate, the national thirst for alcoholic beverages are nearly as old as America itself. Most of the earliest temperance initiatives were born of religious circles, the salvation of the individual drinker being at the heart of their objective. By the early 1800s, however, a more organized approach had emerged. Temperance societies sprang up in virtually every city in America, and their collective enrollment reached more than 1 million members by 1840.

A group known as The Washingtonians gained particular notoriety. The organization’s strength lay in the fact that its membership was composed entirely of “reformed drunkards,” thus adding a certain potency to its admonitions against drink. Ironically, few found any significance in the well-known truth that the club’s namesake, old George Washington himself, was a homebrewer and a lover of good porter.

Indeed, throughout the 18th and 19th centuries, the beer drinker was not a priority target of the temperance crusade. Rather, most of the crusaders saw whiskey and other distilled spirits as the primary menace. Many activists even pointed to beer as a possible solution to “the drink problem,” as they called it. In 1784, when Dr. Benjamin Rush published An Inquiry into the Effects of Spirituous Liquors upon the Human Body and Mind, he preached that, while distilled spirits were a sure path to self-destruction, the daily consumption of beer promoted good health and nutrition.