Mad about the boy…. Jimmy Dean 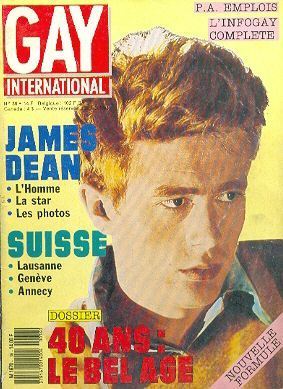 Looking back over half a century to the meteoric career of James Dean, the one thing that now seems obvious is that the boy was as queer as a coot. It wouldn’t matter a scrap if he hadn’t also been groomed to perform vulnerable young male innocence, tormented by inchoate yearnings for heroism, freedom, and true love with the right girl. The studio made sure that he acted it out in real life by supplying him with starlets to be seen with in public.

After he wrote himself off, 50 years ago this September, in his new Porsche 550 Spyder at the age of 24 on a highway near Salinas, there was no reality left to intrude on the myth. Robert Altman, then a naive outsider in Hollywood, was given the job of making a black-and-white pseudo-documentary based on the account of Dean’s life, fashioned by William Bast, Dean’s “closest friend and room-mate for five years”. Altman’s film presents Dean as the studios wanted him to be remembered. He is adolescent torment personified, his the loneliness of every male trapped between childhood and manhood. Dean would be forever the boy who “belonged to no one”.

Posted in 1, Art, European, sex, They Said, WTF. Comments Off on Mad about the boy…. Jimmy Dean

Not quite a T-Bird: David Beckham rides his motorcycle in LA wearing a tie on his way to meet President Obama

Zooming along in a shirt and tie, he doesn’t quite ooze the coolness of a T-Bird or the menace of a Hell’s Angel.

Instead David Beckham ignored safety measures of wearing boots and leathers by hopping on his motorbike in an outfit fit for the office.

Credit where it’s due, he set a good example to the children by sacrificing his hairdo and wearing a helmet as he went to meet President Obama.

Posted in 1, Beer, Football, They Said. Comments Off on Triumph of Style over Safety – Beckham visits Barack

The Spiritual Pagoda by Ikimono Architects

The spiritual pagoda is both towering yet delicate. Inspired by the tragic events of March 11th, the architects felt the need to depict a clearer vision of the future. What they saw were not the bright lights of the city nor the robust feats of engineering that has symbolized the development of mankind. Instead, what they saw was something unchanged yet eternally present: the seasons and time and weather that is produced by the mountainous breathing of our planet.

Posted in 1, A + E, Art, Far East Asia, Japan, They Said. Comments Off on The Spiritual Pagoda by Ikimono Architects

A famous dancer says she was axed as a judge on a TV talent show because she has had a sex change.

Jin Xing was contracted to appear on eight episodes of Feitong Fanxiang, a contest for professional singers broadcast on Zhejiang TV.

However, on Monday night she received a call from the show’s director, Chao Chi-tai, to say she had been dropped because “her transgender identity could have negative effects on society”.

Jin told China Daily that Chao was citing an official document from the Zhejiang provincial administration of radio, film and television.

“We have been friends for many years, and he is a reputable artist, so I believe in him,” said the 44-year-old retired dancer.

An official at the watchdog declined to comment on Thursday, saying only: “I’m too busy to confirm or deny it.”

Jin, who underwent a sex-change operation in 1996, insisted she is not interested in compensation or in taking measures to force an apology from the administration.

“I’m just angry that the officials used such a lame excuse. It’s a personal attack,” she said.

Named after the super treacherous strait formed by Washington Island, WI and the Door Peninsula, Death’s Door Spirits have both a literal and poetic connection to the location. The company’s gin is made from organic wheat and wild juniper berries harvested from the island, while the vodka is made with an organic wheat grown only on Washington Island. Death’s Door White Whisky is made from a mash with an 80:20 ratio of organic Washington Island Wheat and organic malted barley, double-distilled to 160 proof (!), and finished in uncharred oak barrels to bring it together.

Posted in 1, Arthurs Potting Shed, The Red Binder, They Said, WTF. Comments Off on Shed’s Drink of the Week….Death’s Door Spirits

Dogs have been having a swell time at one of the world’s quirkiest events – California’s Surf City Surf Dog contest.

Some 40 dogs competed in different weight categories in the competition, held at Huntington Beach.

Organiser Lisa Scolman said: “We had a great swell of surf which has made for a really great event.

“The competition has grown in spectators over the years because of the waves, although this year we maybe haven’t had as many new dogs joining in because the extra surf scared them away.

“We’ve had a good event besides that, and even the ones that don’t want to join in can take part in the costume party or the walking event.”

Posted in 1, Arf the Dog, They Said, WTF. Comments Off on Surfing dogs hit the waves

Lawn mowers were pushed to the limit last night as the annual 12-hour endurance race across the West Sussex countryside got under way.

More than 30 teams of three driveres battled through the night in a bid to follow in the footsteps of racing legends such as Sir Stirling Moss and be crowned this year’s champion.

All driving genuine lawn mowers, the team members took turns to race during the gruelling event.

The race, which kicked off from Five Oaks, near Billingshurst at 7pm, saw competitors reaching speeds of up to 50mph.

A spokesman for the British Lawn Mower Racing Association said the machines had been slightly and they ran without their cutting decks.

‘The main objectives were and still are, no sponsorship, no commercialism, no cash prizes and no modifying of engines,’ he said. ‘The idea being, it would keep costs down and resulted in lawnmower racing being described by Motor Sport News as the cheapest form of motorsport in the UK.’

Lawn mower racing began in 1973 and Derek Bell, five-time winner of the 24-hour Le Mans race, is a former holder of the 12-hour title.

Find out how pole dancing has become one of the latest fitness fads in China – for men.

In Beijing and other Chinese cities, it’s seen as a fun way to lose weight and tone up.

Portraits of them along with Irish singing twins Jedward and US President Barack Obama have been made using squeezy cheese as part of a stunt by spread maker Primula.

The images were created using the dairy product as part of celebrations for British Cheese Week, which starts today.

Primula marketing director Craig Brooks said the project was “a bit of fun” which put the spread’s versatility to the test.